The Cycle of Discontent and Creation

This past weekend I did something on my bucket list: I slept in a treehouse. Yep, it was a goal of mine for a while and I finally did it. It was amazing and everything I thought it could be.

Ever since I had seen photos of amazing looking treehouses and bizarre luxury hotels on Pinterest years ago, I had this lingering desire to sleep in something exotic. I saw the show Treehouse Masters and I was in love. After a quick Google search, I found that there were in fact several of these luxury treehouses within a two hour drive from me. Sold!

I decided to go solo because I wanted it to be more of a meditative retreat rather than a vacation. I wanted peace and quiet. I wanted stillness. I wanted to be in nature. I spent two nights in the treehouse without access to TV or Internet. A lot of time to think and ponder.

I ventured out on an 8 mile hike into the Mohican forest in Ohio. Hours of solo hiking allowed me to clear my mind and just be in the present moment. I’m able to be more present when I’m doing something out of the ordinary routine.

Me on the trails

During the hike, I noticed a lot of thoughts about my childhood kept popping up. Most notably what it was like to “be a kid” – sleeping in the treehouse and being outside in the wonder of big trees, rocks, rivers, and waterfalls will do that to you. I had fond memories of periods of my life where I felt quintessentially ME. You know, the best times of my life kept coming back into focus as little vignettes.

I thank my friend Elz over at Living Discernment for initially bringing the idea of being “quintessentially me” to my attention. It was a great reflection exercise in discovering your true self or purpose.

I got to see all these “eras” of my life as snapshots into who I am. I felt nostalgic for how things used to be, but when I saw them all together, it helped me paint a broader picture of how my life tends to work out. It gave me a greater appreciation for where I’m at in my life right now.

I noticed a pattern emerge that characterizes just about all those “eras” in my life. 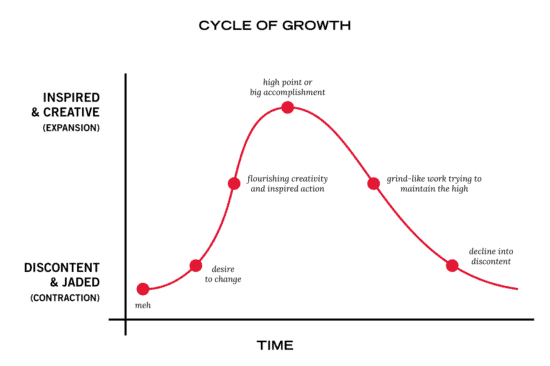 Being jaded tends to be a precursor to being inspired and creative. That certainly makes the difficult times in life seem much more purposeful doesn’t it?

I noticed that whatever environment I was in fails to nourish me or support my goals, I fall out of resonance with it and begin to find resonance elsewhere. The lack of resonance feels a lot like wearing old clothes that are no longer “you.” And the new resonance feels like relief, satiation, or refreshment. Until it doesn’t, which could take years or even a few months or less.

It seems to be. I actually wrote about the state of discontent a few years ago but this insight brings new meaning to me. This pattern is a cycle of GROWTH and EXPANSION.

Without this period of discontent, there would be no desire to change. I was responding to my discontent with an impulse to change and to CREATE.

This was a brilliant “aha” moment.

Synchronistically, I opened up to the where I left off in the book The Happiness of Pursuit (hadn’t read it in months), and the start of the chapter was about how discontent is what fueled the big surges of inspiration (and life quests) for the people in the book. Aha, yes, that is what I was just thinking about!

Breathe in. Breathe out.

While I was nostalgic for the old eras in my past, I remembered it’s just a cycle, a natural flow of contraction and expansion. Breathe in, breathe out. In order for me to actually be inspired to create, I have to go through periods of contraction.

Even in my best eras, I still got jaded in the end (which I never like to remember those parts, everything always seems so great and I wonder why it ever ended). Well, the truthful reason is because I am constantly growing and expanding, and that era no longer serves my expansion. There’s a reason why I started to feel jaded – because I was out-growing it.

I was constantly creating ME in reaction to my surroundings.

This realization also answered the common question of why I don’t draw much anymore. Why doesn’t drawing interest me as much as it did ten years ago?  I felt this guilt that came with not having the same desires as I had when I was younger, as if my present desires were somehow tainted or not as romantic or innocent. But alas, they are. I just don’t see it from the same nostalgic lens.

Reacting to my Environment

My friend Elz suggested I get a Human Design chart to determine my “type.” I was a “Generator.” One of the defining characteristics of a Generator is “reacting” as the primary impulse to create.

I drew a lot as a kid because it felt good then. It brought me joy to see my talents emerge as I reacted to my chaotic environment by escaping to my sketchbook for relief. I became a straight-edge, nice-guy artist in school as a result. I gravitated towards work in computers and art as opposed to manual labor that was so common in my family.

Later, my music and film tastes were shaped largely by a reaction to the mainstream as I gravitated toward punk rock and cinéma vérité. It just felt more “me.” I chose to become a freelance graphic designer instead of getting a “real job” after college because I was jaded with the animation industry and the job hunt bored me to tears. And of course, I started WMC Fest after feeling alienated and discontent with the punk scene. Enough to instill this desire to start my own fest and create anew.

There were many more examples, but you get the picture. The cycle repeats itself.

What a cool treehouse!

All of this brought my present moment into a fresh perspective. It actually reframed my entire life in a way that provides a peaceful feeling of contentedness, even during periods of discontent. How about that?

Look at your own life, do you notice cycles of contraction and expansion? What state are you in now?